DreamCon is a Sega Dreamcast convention, created by MetaFox, that began in 2004 as Dream On at the Midwest Gaming Classic. It became known as DreamCon, an amalgam of Dream On and convention, in 2005.

On May 22 and May 23, 2004, the convention that would become DreamCon was held as Dream On at the Midwest Gaming Classic in Milwaukee, Wisconsin. MetaFox represented Cyberdog Castle and released the first issue of Dream On Magazine. Dan Loosen and Gary Heil of The GOAT Store released the winners of the first Dream On Contest, Inhabitants, and Maqiupai. In addition, Steve Thompson, the creator of Maqiupai, represented S+F Software.

In 2005, the Midwest Gaming Classic wasn't held, so the convention, at that point named DreamCon, was held at the East Coast Gaming Expo on July 25, 2005 in Reading, Pennsylvania. As the Midwest Gaming Classic, the usual place for new GOAT Store Publishing games to debut, was not held, DreamCon 2005 featured a playable demo of Cool Herders. It also was host to many familiar names from the Dreamcast community. Sam Steele was present with updated versions of DCSquares and DCBlap. Lawrence Sebald had updated versions of his RPGs, ljsdcdev and DCRPG, on hand. I.M Weasel had his Macintosh burning tools available. Curt Grymala represented DC Evolution and DCHelp with a "burning station" and several of DC Evolution's compilations available on a high-quality CD-R with a laser printed label and booklet with a CD case. MetaFox represented The GOAT Store, Dreamcast-Scene, Screamcast, Cydoca Entertainment, and the Dream On website. Playable versions of Grizzlies: Forest Prelude and Feet of Fury were available. Fackue's Dreamcast development discs were also available to anyone who wanted to get into Dreamcast developing.

The next year, it was decided that the convention would be held at multiple locations. The first stop of DreamCon 2006 was held at Magfest 4 on January 13, January 14, and January 15 in Charlottesville, Virginia. As with the last DreamCon, a new playable GOAT Store Publishing game was presented, only this time it was the first time the public got a glimpse at the game. A demo of GOAT Games was presented for the first time at the show. Curt Grymala, representing DC Evolution and DCHelp, returned with the "burning station" setup from the last year, except he had new compilations to hand out to the convention attendees. MetaFox once again returned as well, representing The GOAT Store, Dreamcast-Scene, Cydoca Entertainment, and the Dream On website. Playable versions of Feet of Fury, Maqiupai, Inhabitants, Cool Herders, and the unlicensed Korean Dream Para Para game were available. Screamcast was represented at this convention by Donald Haase. Screamcast had Grizzlies: Forest Prelude and BurgerDC on show.

The second location of the show was at the Midwest Gaming Classic 2006, held on June 3 and June 4, 2006, returning after a year in hiatus. Exhibiting at the event was DCSteve and Tommy Watson from BOR Revolution, a site dedicated to showcasing games using the engines from Senile Team. MetaFox was also once again exhibiting at the event, representing Screamcast, Cydoca Entertainment, Dreamcast-Scene, and the Dream On website. Dan Loosen from The GOAT Store announced ten new games for the Dreamcast at the show: Feet of Fury 2, Donk!: Samurai Duck, R3K, an untitled S+F Software adventure game, Amnesia: Psychic Spelunker, Blocks2: Master of Blocks, Age of the Beast SE, Fightoon, Yumi: Samurai Warrior, and Feuer Frei. In addition, new information was revealed about GOAT Games and DCastle. Several games featuring the Beats of Rage engine were showcased, and a new video for Age of the Beast was shown. In addition, videos were shown for Blocks2: Master of Blocks and screenshots were shown for Fightoon. Grizzlies: Forest Prelude and BurgerDC were once again playable at the show. The Dream On Contest winners, Dynamite Dreams and Feuer Frei, were shown for the first time.

The 2007 DreamCon convention was held by Curt Grymala of DC Evolution at Magfest 5 on January 4th, January 5, January 6 and January 7 in Vienna, Virginia. This time DreamCon was integrated right into the convention with several tournaments. Saturday's tournament was Cool Herders, with the prize being copies of some of DC Evolution's images, complete with labels and cover art. Sunday's tournament was Feet of Fury, with the prize being a Dreamcast with all of the hookups, a Playstation controller adapter (so a Playstation dance mat could be hooked up), and a copy of Feet of Fury.

The DreamCon convention returned in 2015. It was scaled back a bit from previous years. MetaFox was also once again represented Cydoca Entertainment, Dreamcast-Scene, and the Dream On website via the DreamCon space that was allocated through one single booth space at the Con on the Cob 2015 in Richfield, Ohio which was held on October 15, October 16, October 17, and October 18.

In 2018, DreamCon took place at a table at the RetroGameCon 2018 in Syracuse, NY, that ran from November 3 to November 4. The convention was once again held by MetaFox, who represented Cydoca Entertainment, DC Evolution, Dreamcast-Scene, The Dreamcast Junkyard, West Elmira Computers Museum, The Adventuress, Cyberdog Castle, Indie Dreams Wiki, and the Dream On website. 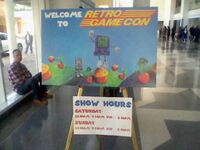 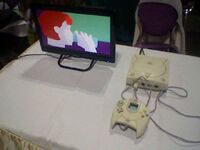 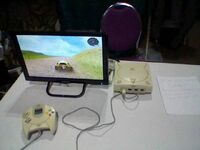 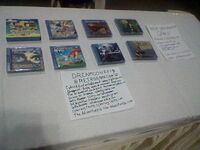 Retrieved from "https://indiedreams.fandom.com/wiki/DreamCon?oldid=5043"
Community content is available under CC-BY-SA unless otherwise noted.